The plant celery is very similar to parsley and has a strong taste.

Celery can be used in many ways.

On this page, you will find more information about the application and properties of this herb. 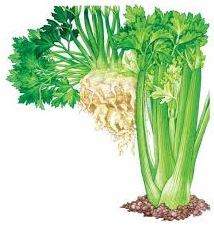 Celeriac is a variety of celery, Apium graveolens var. rapaceum: this plant forms a corm just above the ground with a diameter of about 10 cm.

Use and Application Celery Species

The leaves of celery are used dried and fresh.

In Chinese cuisine, celery leaves are used in stir-fries and Greek cuisine in soups and sauces. The leaves have a robust predominant taste.

They are also added to salads, cream cheese, stews, and stuffings.

In English cuisine, they can be found in stews and pickles—Indian cuisine in chutneys and Dutch cuisine in tomato dishes and spice mixtures.

The plant can be weakly poisonous (emphasizing weakly), so it is safer in cooked dishes.

Cooking it also reduces its bitterness.

The seeds and distilled oil help:

The leaves and stems of celery stimulate the digestion of food.

What is described above applies mainly to celeriac. The corm of celeriac is less sharp-tasting than the leaves of cutting celeriac.

In principle, celeriac is grown for its corm (as a vegetable), but the leaves can also be eaten.

(The leaves of) celeriac can therefore also be considered as kitchen herbs.

This also applies to celery leaves, although one mainly uses and eats the leafstalks.